On Saturday March 28th Driss Bennis was headlining at this year’s Listen Festival. Looking at the flyer, an odd feeling comes over me. While normally line-ups and artwork serve as the only lasting souvenirs of an ephemeral clubbing experience, all of the events cancelled due to Covid-19 will be archived under the exceptional ‘we have never happened’ category. Luckily Driss Bennis has just performed live for ‘Support Your Brussels Scene’, a series of live streams set up by Kiosk Radio travelling every Monday of the summer to another venue in town. His music sounds playful and uptempo, ranging from dreamy deep house to uptempo electro, peppered with fun samples from legendary musicians such as Kraftwerk. At long last the half an hour video allows me to create my own version of a night in March that did not take place.

When I find out Driss is residing in Brussels at the moment, I contact the Moroccan producer and Casa Voyager label boss. After having read an interview on American influential website Billboard.com (available here) - a feature largely focusing on his roots - I suggest Boussiphone as one of our debate topics in my introductory email. This label was highly active between the sixties and nineties and vital in distributing Moroccan music to the diaspora in Europe, with an office and studio in Brussels. Driss answers enthusiastically on my interview request, but denies talking about traditional Moroccan music with the words “I know the label, but it would be the same as interviewing Peter Van Hoesen about Jacques Brel”. I agree with him and we set a date. 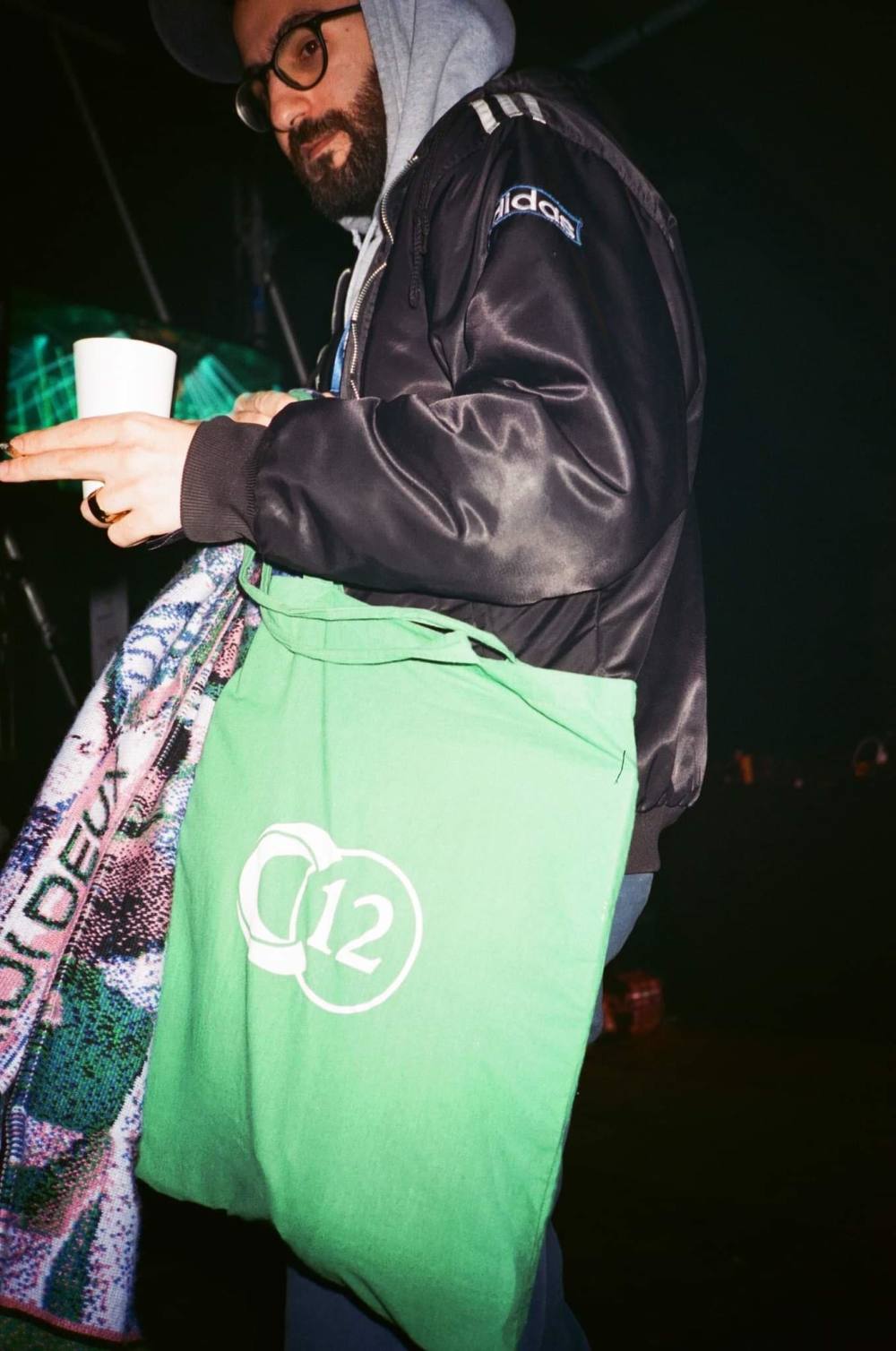 Not much later I’m welcomed by Driss in his Brussels home, it’s a hot day early August. He occupies a huge three bedroom apartment on his own - his new flatmates haven’t arrived yet - and has installed his studio on one side of the living room and some vinyl records - I spot J Dilla and Juan Atkins - on the other. There isn’t even a table or couch yet, it’s only music filling the space. It has been three years now since Driss has launched his label Casa Voyager, named after Casablanca’s major train station. Or more accurately, named after the collective Driss and his friends started nine years ago in Morocco. The first release ‘Casa Sports Vol.1’ compiled work by Driss himself under his OCB moniker and his pals Kosh and Viewtiful Joe. It quickly caused a stir among electronic music fans. Today the label has released 10 vinyl records, two tapes and two digital compilations. Driss’ alter ego Dj Booth also pops up on three releases of Brussels label Basic Moves, it actually was label owner Michiel (DJ Walrus) who first connected Driss with our Belgian capital.

“When I lived in Morocco, I was a local. When I lived in Paris, I was a local. When I lived in Berlin, I was a local. Now that I’m in Brussels, I’m a local again.” Driss laughs when I ask him about the live video stream he just did for Kiosk Radio’s ‘Support Your Brussels Scene’. He admits to enjoy being connected to local scenes. Here in Brussels he spends time at Crevette Records and feels at home in C12, the city’s industrious underground club. He even submitted a track to C12’s 10-part ‘Social Distancing’ compilation appropriately dubbed ‘Brussels Electronic’ (to be found on chapter 1.3). Driss grew up in Casablanca. As a teenager he wanted to work in cinema, but from an early age also got into making music. When his older sister moved back from France, he dived into the records and digital music she brought home. Downloading music software Fruity Loops was the next logical step. With Youtube tutorials nonexistent at the time, he started to learn the craft on a trial and error basis, an approach that he strongly believes in still today.

Driss decided to discover Europe just as his sister and landed in Paris in 2010, loaded with enthusiasm to discover the music scene he was falling in love with. “At a show of Jeff Mills in Rex Club I remember experiencing what I was looking for. It blew my mind and I finally felt part of the scene. It was a stimulating period. Coming from Morocco which is most likely to be a third world country, to a wealthier country such as France, I remember being kind of shocked to see touch screens in subway stations.” The discovery of the Parisian club scene was an eye-opener for Driss and got him into throwing parties himself with a bunch of friends. At the same time, on a trip back home he heard of an underground party happening in Fellah Hotel in Marrakech. “It was as if everyone who was active in an underground art scene - fashion, video, music, clubbing, etc. - was in this small room. It was liberating to enjoy good music and have a party in my own Morocco for the very first time. The DJ at work was Polyswitch, who later became an essential member of our crew, I remember him playing ‘Man Or Mistress’ by Levon Vincent, which was the big tune at the time I was desperately looking for. That’s where I met some of my best friends and where the fundamentals were laid for Casa Voyager, which started as a collective of friends. And not much before I had met Kosh at the dance floor of Rex Club in Paris.” 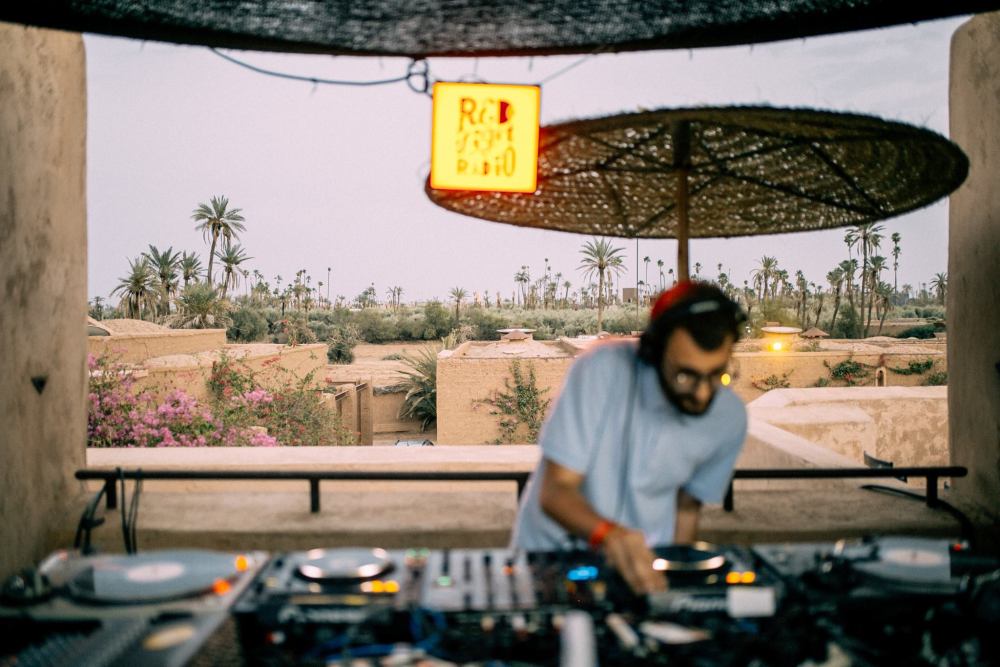 Fast forward to May 2019 when Casa Voyager hosted a label party in London’s famous Pickle Factory. The flyer mentions OCB, Kosh live and Malik on the line-up for the night. Reminiscing about the event still amazes him, a packed and windowless warehouse with dancers wearing label t-shirts and so much moisture a cigarette couldn’t be lighted. The story illustrates well the international success Casa Voyager has gained. Although most online sources now speak of Driss as founder and label manager, he underlines that it is still a collective. “Somebody had to take the initiative to make it a real label and organise the administrative part of it in Europe, otherwise we would still only be dreaming in our online chat groups”, he explains. “To me it will always be a Moroccan label, created by a Moroccan community. 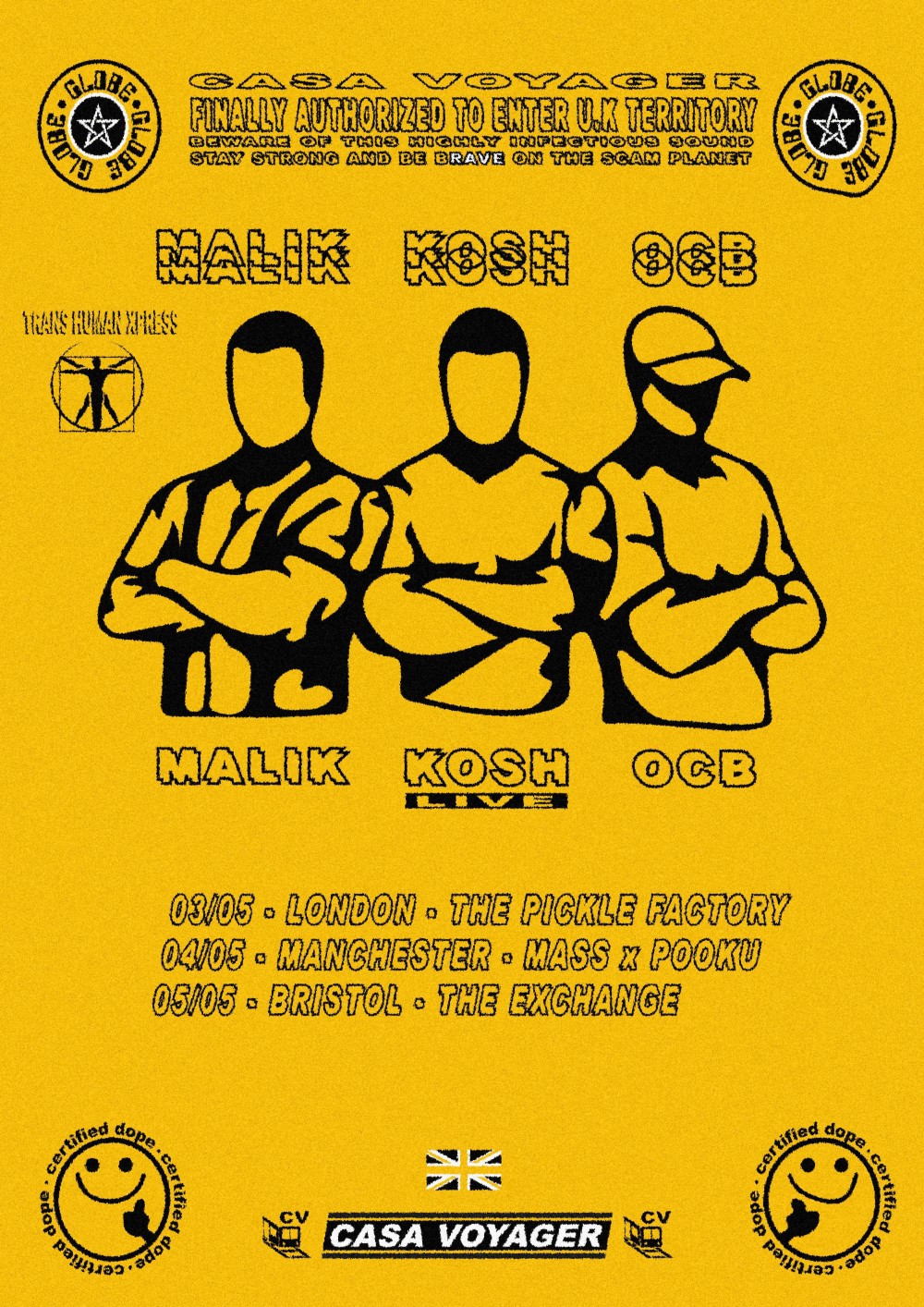 After five years Driss got fed up with his life in Paris. Feeling trapped in a loop and even burned out, he took his experience as an employee of a Parisian service company and moved to Berlin to start his own. Not speaking a word German, it did help him to make his way around town and make some money for himself, after a while even contracting staff as an employer. But this kind of business wasn’t his life goal, just a course of action to take control of his life again, Driss admits. “The day I stopped that job, it changed the whole panorama again. I moved into a nice flat and all the negative energy that got stuck on me in Paris, slowly vanished. I got a studio space in Wilde Renate and felt my creativity rise again. I didn’t have any real expectations though, I just enjoyed myself and spent a lot of time in clubs, meeting people and listening to music.”

Three years later Berlin proved to not be Driss’ final destination though. It was 2018 and he was forced to move back to Morocco due to visa problems. In hindsight he feels grateful for his time in Berlin, but the German capital wasn’t his cup of tea either, he reflects: “My time there has given me the strength, confidence and knowledge to start my label. The connections I made there are definitely part of the aligning stars leading to my later growth. Leaving Berlin felt like the end of a love story, but I’m also happy to leave it that way. There is a part of me that doesn’t thrive well in this Disneyland for electronic music, where too many people over the past years moved in for the wrong reasons. I’m attracted by subversion, which is essential in arts and culture, but in Berlin subversion is the norm and everyone looks just the same. It has an opposite effect on me.” 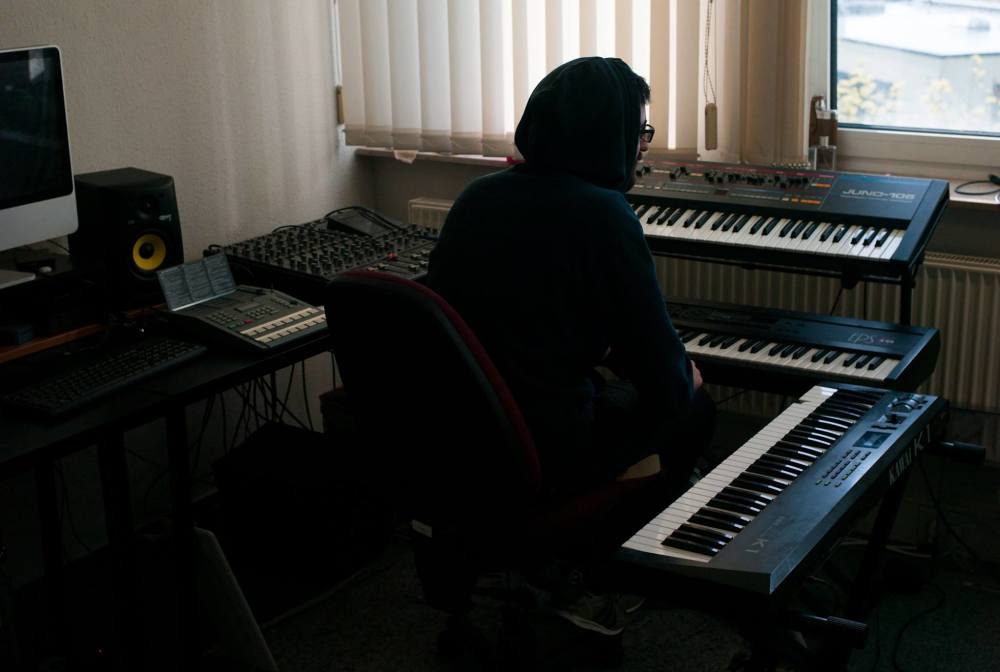 So Driss ended up back in his mother’s apartment in Casablanca, in the same small room where he first started making music and spent his youth. A dark feeling of depression got over him, an effect of the sudden removal from the European clubbing scene. “I was really frustrated”, he says. “And so I started to make a lot of music, in the worst sonical room of the world, with only one monitor speaker. The Anticlimax, the title of Casa Voyager’s third release and my first solo EP as OCB was a direct result of this period.” And it would also become another pivotal moment in Driss’ life. His releases started to sell well, leading to more and more attention and performances worldwide. So he decided to apply for a new visa at the French embassy, using contracts from his label releases and some articles on international websites to back up his application. His plan succeeded and after some time in Paris settling back on the European continent, it was Brussels that attracted him for a new life chapter. Until Corona hit and the world was forced to pause.

“The real battle nowadays is ecological and therefore anti-capitalist”, Driss says firmly. “I’m puzzled, also as an artist and head of a vinyl record label producing plastic and taking planes. I’m really trying to find ways to make things better in my own life. I actually consider to simply move back to Morocco and settle there. For the past years I have been touring a lot, but now I question myself. I could spend nine months per year home and travel three, instead of the opposite. And I could help create a bigger local scene in Morocco, instead of complaining about its absence. 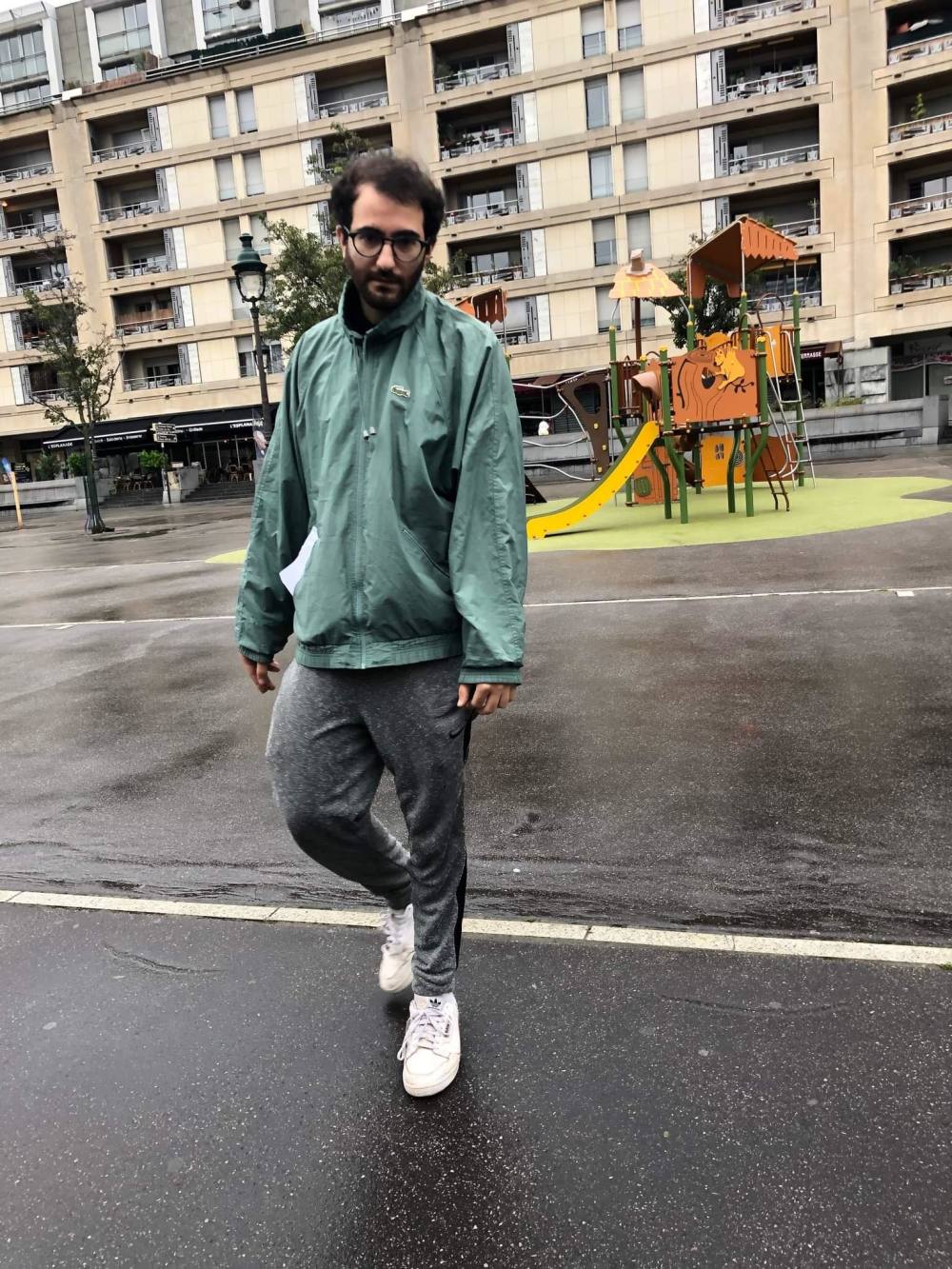 Driss and I end up speaking for two hours straight and lots of topics are touched upon. He isn’t scared to speak out his mind and share clear opinions on contemporary subjects such as call-out-culture, racism, nationalism and obviously the impact of the global pandemic. In the midst of all this, he tries to make music and follow his passions, from his tiny Casablanca teenager bedroom to a huge apartment in Brussels today. “But I don’t want to be known for being the Arab electronic music producer”, he concludes. “That’s why I haven’t got much to say about traditional Moroccan music. I do know it, since it’s part of my culture. But I wasn’t very happy with some past articles, using my Moroccan roots as lead title. It’s a narrative chosen by western media, often coming from a certain feeling of guilt after having failed to feature enough Arabs or people of colour. We live in a global world, I got touched as a teenager by electronic music coming from everywhere including my own country. It’s nonsense to first search for my local influences.”